How to Know if Brussels Sprouts Have Gone bad

Brussels sprouts resemble cabbage heads, but in miniature size. Both the vegetables are very similar in taste as well, but comparatively, Brussels sprouts have a milder flavor and denser texture. These are cruciferous vegetables that are rich in antioxidants, vitamin A and C, indoles and other necessary nutrients. Although you can buy them all year round, their peak growing season is from autumn to early spring. When cooked, Brussels sprouts give a nutty flavor that reminds us of classical fall cooking. But if yours are sitting in your refrigerator for so many days, and you suspect that they might have gone bad, this oneHOWTO article will tell you how to know if Brussels sprouts have gone bad.

You may also be interested in: How to Know if Grapes Have Gone Bad
Contents

Instructions to find out if Brussels sprouts have gone bad

If you suspect your Brussels sprouts have gone bad, follow these instructions to make sure:

When you go to the market to buy Brussels sprouts, look for the ones that are firm, compact and bright green. Here are a few tips that can help you buy the best of sprouts available out there and avoid those brussels sprouts that have gone bad in the shop:

If you're sprouts are in good condition, how about making a delicious brussels sprouts gratin?

How to store Brussels sprouts properly

Once you have brought the best of sprouts to your home, it is also necessary to store them properly. Never wash your sprouts if you intend to store them. Water will get trapped inside the sprouts, and cause them to rot more quickly. Although they can last in your refrigerator for as long as two weeks, it is best to consume them as fast as you can. The older any vegetable is, the more nutrient loss it goes through.

If you want to read similar articles to How to Know if Brussels Sprouts Have Gone bad, we recommend you visit our Food & drink category.

5 comments
Rating:
Arline Wulfekotter
16/08/2021
I bought a bag of Brussel sprouts at Aldi. They did not have any of the issues you mentioned indicating that they might be going bad. I always peel off the top leaves, still no issues. I steamed them and was very turned off by their brownish color inside the sprouts. Could it be I over steamed them to make them tan/brownish in color? I was very much turned off by the change in color. Thanks.

OneHowTo Editor
17/08/2021
If you cook sprouts for long enough, they will look grey and even start to disintegrate. This doesn't mean they have gone bad. It is possible there is a problem with the sprouts, but if the outside was firm and looked good, but the inside was rotten, it is not to do with the sell-by-date. It means they have a problem and should be returned to the store for a refund.
Rating:
Meredith
10/08/2021
I have looked everywhere online and can't seem to find a clear answer on the following: I've been buying, cooking & devouring Brussels sprouts for a long time and never really noticed a bad smell... until now
A couple of days ago while grabbing my usual bag of raw Brussels sprouts off the produce shelf, containers of halved sprouts caught my eye. They looked perfect and of course, EASY. I figured I'd buy a few of those packages as well as the bag. Later that day I opened the packages to begin cooking them but I was overwhelmed by the smell of rotten eggs. I'm aware of the sulfur compound in brussels sprouts but after reading & reading, all I was able to find was that this smell comes on after being exposed to heat, which these sprouts were not. I decided to put them back in my fridge & research online a bit more. I realized that this was the first time I had bought them in clamshell packaging & I'm wondering if, when opened, gasses were released & caused the smell? I did call the phone number on the packaging but was told the vendor would call me within 72 hours, definitely not soon enough as the date on the packaging is today's date. Another piece of information: when the company asked for some information that was on the packaging I realized that 1 of the packages had a later expiration date. I had opened 2 out of 3 packages & one of those was the later date, so although different "batches", they both smelled. After a short while I smelled them again & it seemed the smell was almost gone which is another reason I'm thinking the clamshell packaging might've caused it... it was as if I aired them out and the smell ALMOST cleared. Today I again took the packages out of the fridge and I could swear my entire fridge smelled like rotten eggs which I thought was strange since, when I put my nose to the already opened packages, I barely could smell what I had originally smelled. Then I realized that I still hadn't opened the 3rd package so I pulled the plastic tab to unseal the package & opened the lid, immediately I had to pull away, the rotten egg smell was so strong I gagged. Now I'm wondering if the other 2 didn't really smell but instead it was this 3rd package that, although still sealed, was what I smelled (and caused my refrigerator to smell). That 3rd package was one of the 2 that had the same expiration date, which only confused me more as it would be easier to understand if the 1 package with a different date smelled, or even if both packages with the same date smelled. I'm sorry to go on and on, I wanted to give all the info I could for a more accurate "diagnosis" of my poor, stinky sprouts!
PS: thankfully the bag of sprouts I bought had no smell so they were enough to tide over my roasted brussels sprouts craving... and stop me from desperately cooking the stinky sprouts.

If the Brussels sprouts are rotten, they should continue to smell. There may be an issue with packaging which means some gases or preservatives have been included while packaging, but this is only a guess. If the Brussels sprouts themselves appear to be fine, it shouldn't propose a major problem. However, it is probably best to be safe, rather than sorry. We would recommend taking them back to the point of purchase and explaining the problem.
Rating:
Edward Lear
01/01/2021
Brilliant - every aspect answered for me - Thanks hugely

OneHowTo Editor
27/01/2021
You're very welcome Edward!
Rating:
LETHA REECE
23/09/2020
I bought a bag of Russel sprouts at grocery store and the bag was looking like a balloon and they smelled foul when i opened does that mean they were spoiled

It sounds like they might be. Probably best not to risk it.
Julie
26/09/2019
Sprouts bought today, not a hot day, no date on package. They look fine, no discolouration, feel fine, not slimy or remotely off, have cut one in half and it is fine. But the smell. I have removed from plastic package, now wrapped in kitchen roll paper in my fridge veggie drawer. I think the smell is slightly dissipating but still pretty bad. Daren't wash them till I maybe(!?) use them.
How to Know if Brussels Sprouts Have Gone bad 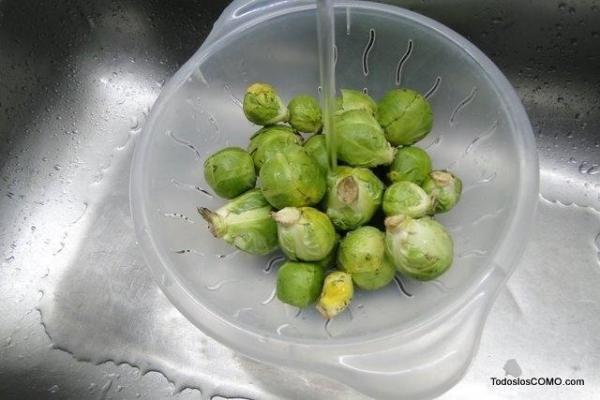 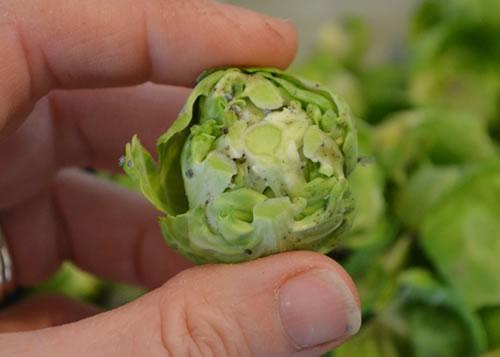 Image: liveearthfarm
1 of 2
How to Know if Brussels Sprouts Have Gone bad
Back to top