Is Reheating Coffee in the Microwave Bad for You? 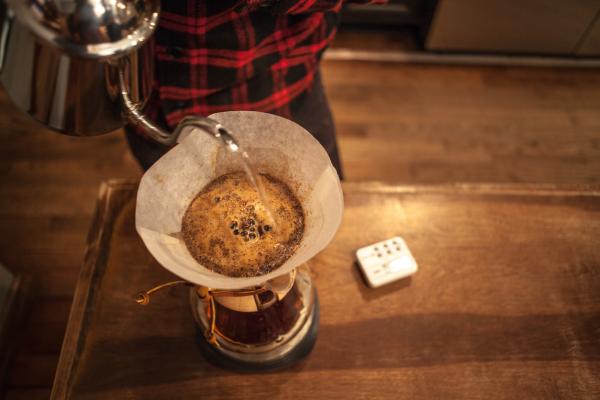 Even those of us who don't drink coffee are often found standing near the espresso maker in a cafe and inhaling deep breaths of the black gold aroma. There is something about freshly brewed coffee that invigorates the senses and not just because of the caffeine. However, if said coffee is made at work or during a hectic morning, it's common to neglect our drink until it has gone cold. Should we throw the old one a way or is reheating it a valid way of consuming it? Reheating coffee in the microwave is not bad for you, depending on your definition of what is ‘bad’. Keep reading oneHOWTO as we look into the health and flavor implications of reheating coffee in the microwave to see if it is a practice you might want to start.

You may also be interested in: How to Make a Dalgona Coffee
Contents

Chances are 20 years ago you only saw a home espresso machine in the most affluent households or cafetières in your aunt's house. You know, the one who travelled to Europe once in the mid-80's and greets you with bonjour instead of hello. You certainly wouldn't have seen an AeroPress, considering it was only invented in 2005. But in those last 20 years, coffee consumption world wide has almost doubled which has lead to a new coffee culture and approach to the drink.

Greasy spoon cafes with a pot of percolated coffee bubbling away all afternoon are now pretty much gone. In their place are the artisan roasting houses where each bean is hand picked and ground individually. This is done with tiny hammers before being matched to the melted glacier water which best represents its flavor profile. It is definitely a good thing to drink responsibly sourced coffee which respects the often fragile infrastructures of the countries in which the beans are grown. Sometimes, however, the seriousness with which people take their coffee can be stifling.

In their defence, you can taste the difference. If the bean has been over-roasted, the grounds scorched with water which is too hot or simply made without due attention, the coffee can indeed be pretty terrible. But if you have taken the time to make a good cup and used decent beans, the difference really depends on personal taste. In a similar approach to wine, you will definitely find absolutely delicious vintage or organic wines which come at a pretty penny and should be drunk on a special occasion. This doesn't mean that a bottle of table wine can't be decent and drinkable with a cheap dinner.

What happens to cold coffee?

There are some people out there who question why coffee tastes great when hot, great when cold (iced coffee), but terrible at room temperature. It is a valid question as tepid coffee can be quite unpleasant. One theory on the matter is that when you drink hot or cold coffee your taste buds are not reacting to the bitterness of the coffee. Instead it is simple the reaction caused by temperature. When the coffee is at room temperature the taste receptors notice the bitterness more. Another consideration is more to do with the aroma of the coffee as this is such a large part of our taste experience. When the coffee is cold the aromas are not agitated as much and we won't appreciate the smell, making our brain believe that the taste is bad when really it is quite similar. Another factor may be if we add milk to the coffee as room temperature milk does not taste as good as hot or cold milk.

There are message boards filled with strong beliefs that coffee when cold has undergone a molecular change which will drastically change its flavor profile. The coffee itself will undergo oxidization thanks to its exposure to air which will affect the sugars and aromatic oils contained in the coffee. This, again, is similar to wine in that a bottle will oxidize once opened. However, many people claim that this oxidisation process will happen in super fast time as seen by a message board commentator who claimed espressos should be drunk not more than 20-30 seconds after being brewed as it will lose its flavor. This seems to be quite extreme, let alone impractical and potentially mouth burning.

If you enjoy drinking filtered coffee from a percolator then you will notice a difference in flavor from the first cup the one you have an hour later. The reason for this has a lot to do with the heat pad on which it sits. The heat from the pad keeps the coffee pot hot and, when coffee is hot, it releases steam. The coffee doesn't so much stay warm as it is essentially being reheated in the coffee maker. Every time the coffee pot is taken off and put back on again. This means when you come back to the coffee later, there is less water in the pot and the coffee is more concentrated. This in turn gives it a stronger and more bitter flavor which can sometimes be unpleasant. However, if the coffee is diluted with a splash of hot water or even just some milk, the result often tastes fine or better.

Does microwaving coffee affect our health?

Some people want to know whether reaheating cold coffee is bad for you because they hear horror stories. These stories seem to be constant grist to the journalism mill, particularly in tabloid newspapers. Stories which appear every year or so alternately stating that coffee helps reduce the risk of cancer then claiming it can actually cause the disease. A similar thing happens with microwaveable technologies. However, scientific research has found that unless you press your eyeballs directly to the door of a microwave when it is on, there is little chance of it affecting you and none when the timer has pinged.

The question then is not about microwaving coffee tasting bad, but microwaved coffee potentially being unsafe. The answer to the latter is a definite no. Microwaves are merely high frequency radio waves and the affect they have on food does not have carcinogenic properties. This is at least none compared to any other type of cooking. Heating a cup of coffee will make the molecules move faster as they heat up, but they will not fundamentally change their structure. It's not a large hadron collider.

Is it bad to reheat coffee in the microwave?

The answer to this question comes down to a matter of taste. Or on your definition of what is bad coffee, In 1987, an LA Times article about reheating coffee in the microwave claimed it was a practice 99% of microwave owners partook in. It also claimed "coffee is strongly linked to microwaving"[1]. If you look at the coffee landscape some thirty years later, this seems like it is no longer the case. Whether or not it ever was the accurate is debatable due to possible bias. This is thanks to the statistic being taken from a microwave manufacturers' research and the author of the article having written books promoting the use of microwave cooking.

Anecdotal evidence, however, would support the claim. My dad has never had any qualms popping a cup of cold joe in the microwave and blasting until he has to let it go cold enough again to drink it. He claims to enjoy it just as much. If you can only drink coffee which is freshly brewed, of premium quality and with a perfect creme on top, then the answer will be no. The only thing stopping you, however, is preference.

If the coffee has not long gone cold the oxidization process will not have affected it dramatically. Putting it in the microwave will help those aromas start back up, keep your taste receptors on their toes and can still be an enjoyable cup of coffee. You often see a little creme (the frothy gold substance you see from freshly brewed coffee) reappear when drinking it black. If you are worried about the coffee becoming more concentrated thanks to extra evaporation, then you can add a little more water or milk. Also, you should not let it boil, but rather heat until just before this happens.

Reheating coffee in the microwave is not bad for you as it shouldn't cause you any medical harm and it shouldn't be unpalatable. It's also better for the environment since it is less wasteful.

Reheating coffee in the microwave can result in a pleasant coffee if the drink was enjoyable in the first place. It may not be perfect or as good as a fresh batch, but it is not the abhorrent poisoned muck some people claim it is either. Ultimately, it is also less wasteful and shows more respect for the environment which produced it.

This is perhaps a divisive issue for coffee drinkers, so please leave your thoughts in the comments below.

If you want to read similar articles to Is Reheating Coffee in the Microwave Bad for You?, we recommend you visit our Food & drink category.

Is Drinking A Lot Of Tea Bad For You?
How to Make a Good Cup of Coffee in an Italian Coffee Maker
How to Froth Milk without an Espresso Machine
How To Make Coffee Taste Good
Most read
1.
Homemade Kinder Bueno Filling
2.
How to Tell if Mushrooms are Still Good to Eat
3.
How to Tell if Broccoli Has Gone Bad
4.
How to Know if Brussels Sprouts Have Gone bad
5.
How to Make Paneer at Home with Spoiled Milk
6.
How to Tell if Tofu Has Gone Bad - Shelf Life of Tofu
7.
2 Easy Ways to Fry an Egg Without Oil or Butter
8.
How To Fry An Egg In The Microwave

Is Reheating Coffee in the Microwave Bad for You? 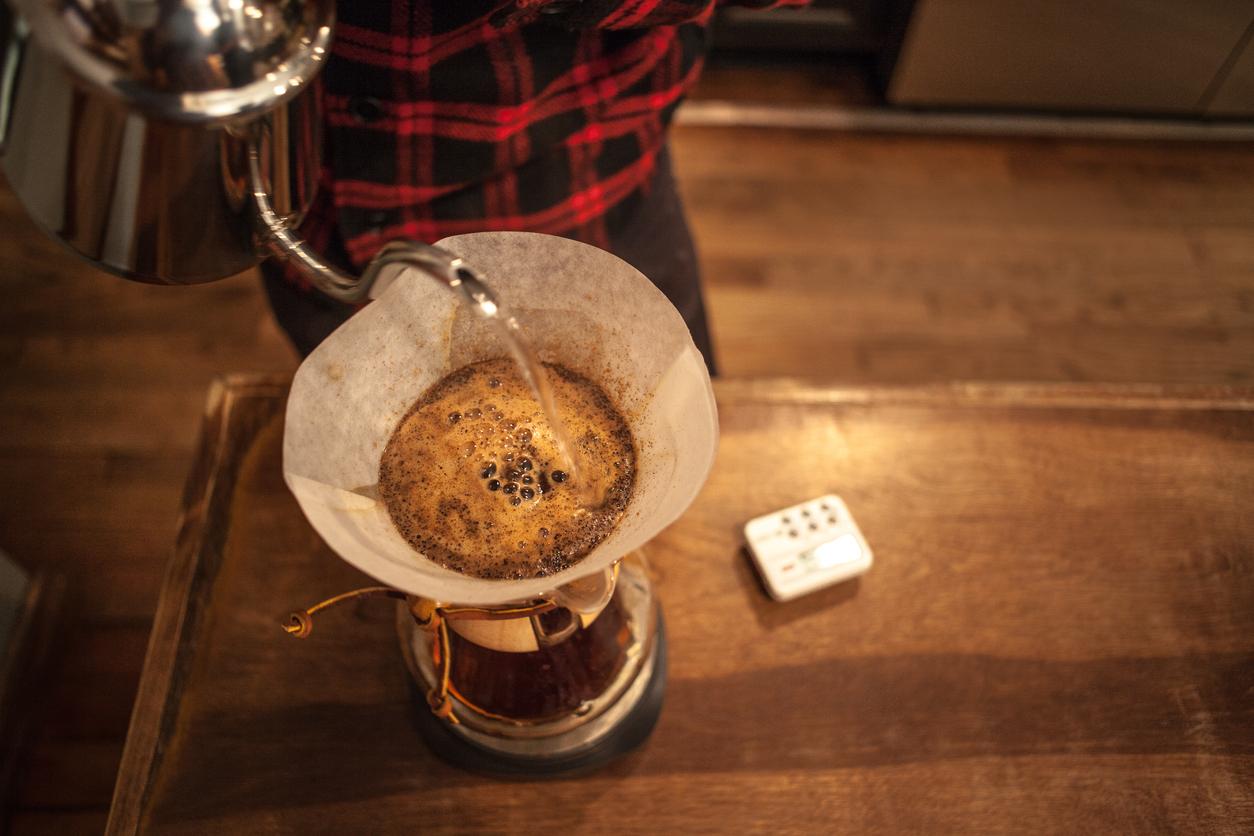 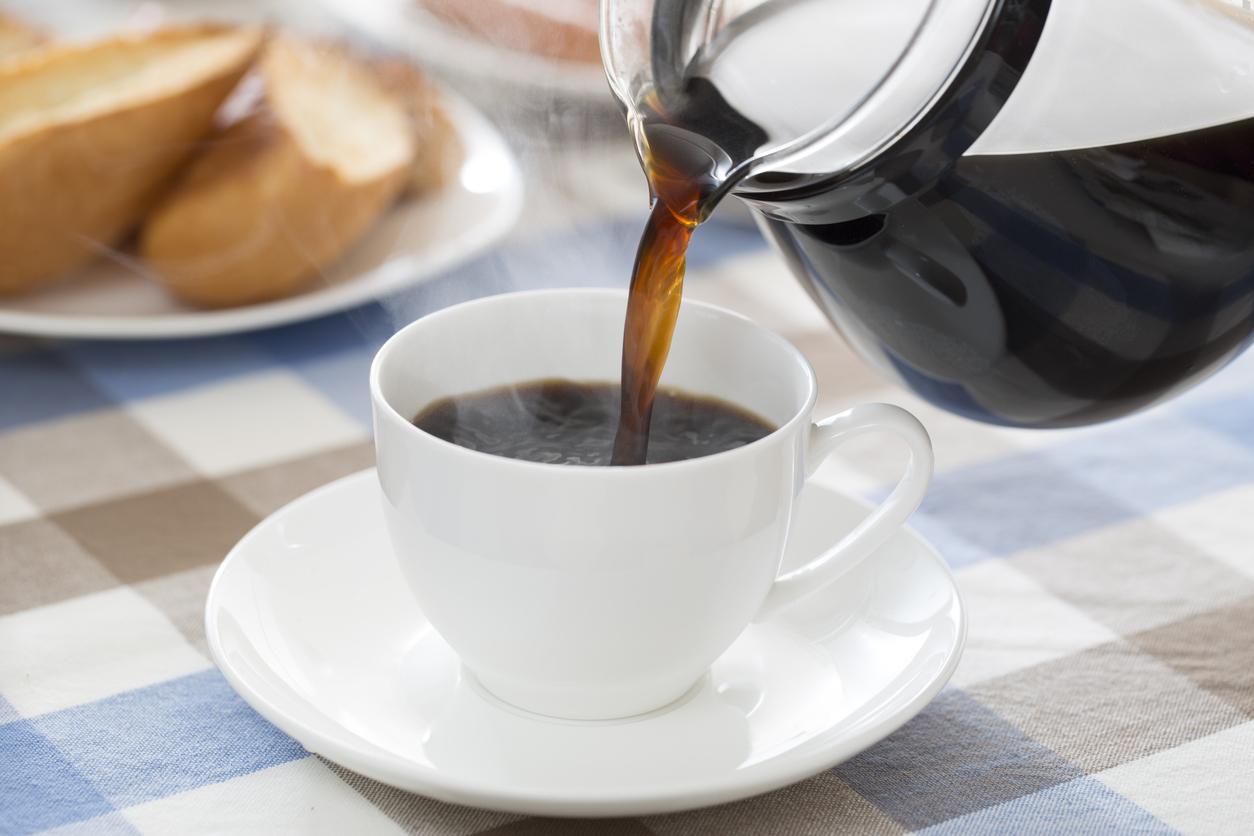 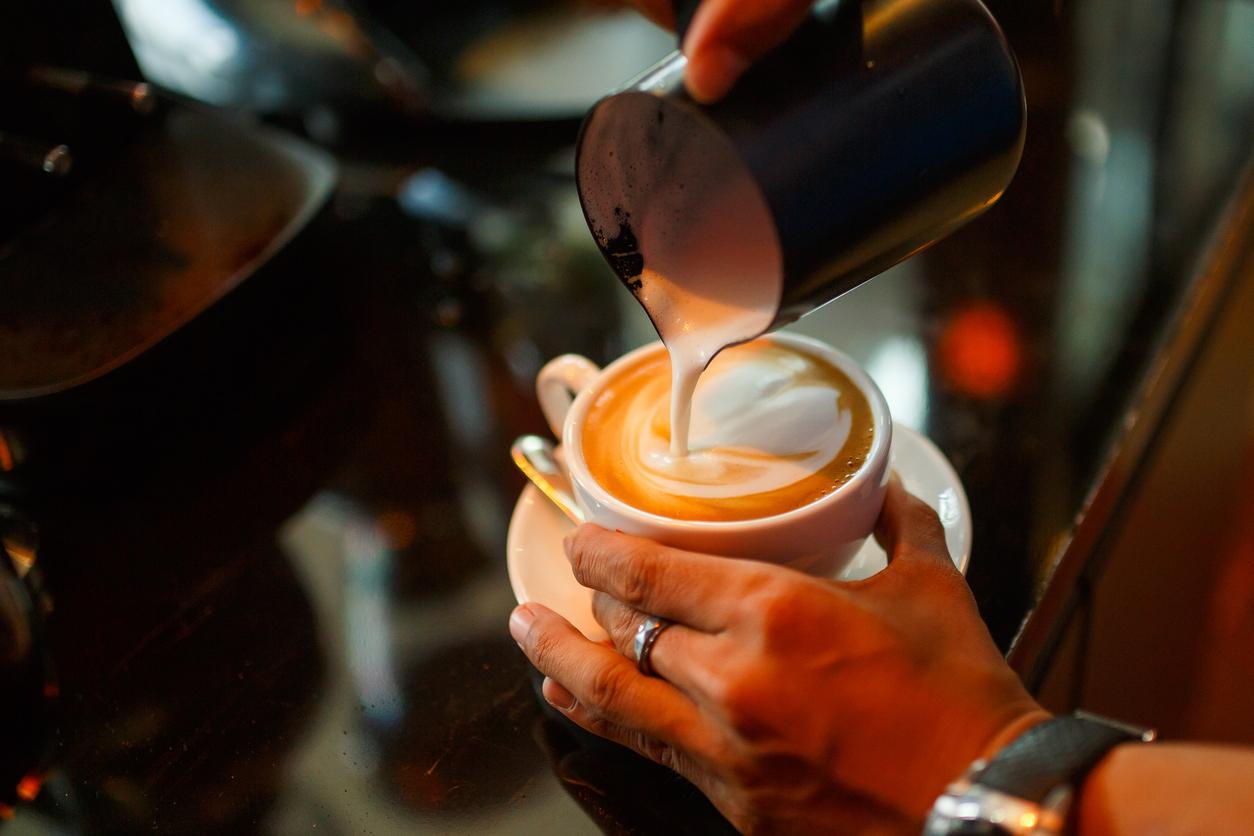 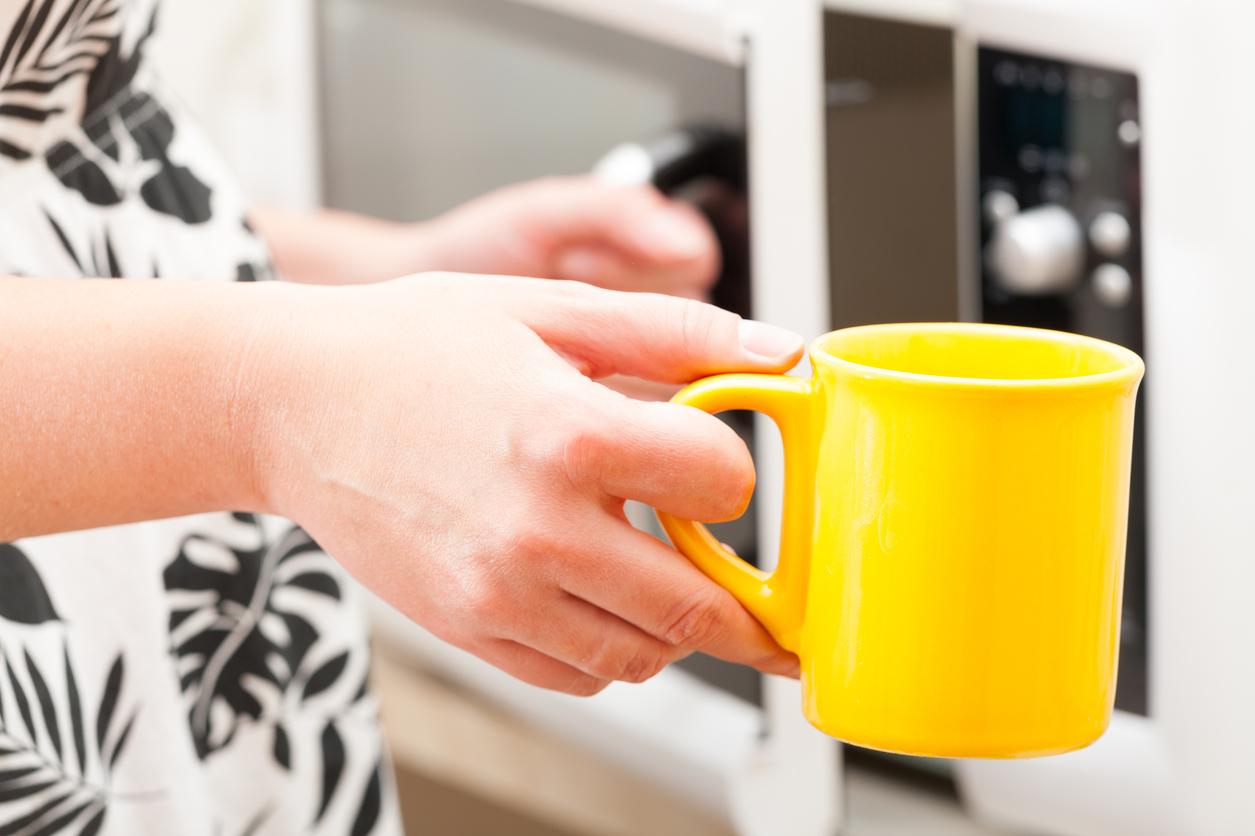 1 of 4
Is Reheating Coffee in the Microwave Bad for You?
Back to top